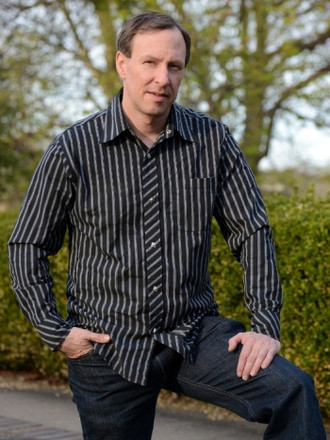 It's been said -- at least by me -- that passions discovered late in life burn brightest. I've always been intensely creative, and occasionally expressed it in unconventional ways. With JKB Photography, I hope to return to a conventional medium -- but, at least occasionally, take highly unconventional, unforgettable photographs.

I started my first business back in high school. 223 Productions (so called because school let out at 2:23) published a black and white comic book series. I wrote, while my more artistically talented partner drew. (He's since become a big time illustrator and educator.) Since the b/w market collapsed soon after, it was a short series. Nevertheless, we sold 10,000+ books in the U.S. and Canada -- and got three fan letters. In college I continued writing, and found I could support myself that way easier than with the engineering jobs I could get at the time.

I discovered photography by accident! Many years later, while working on the web property Machovy.com, we hired Roger Williams Photography to shoot some video. He's in high demand, so quite often we had to wait weeks for him to free up. Long story short, I became his assistant to hurry things along... and as they say, the rest is history.

I proudly accept Bitcoin for anything!