Did you ever accidentally open a mushroom farm? I don't remember planting mushrooms (or doing whatever you do to make fungus grow outside your refrigerator) -- but that's exactly seems to have happened. I woke up one morning to a fungal field day, with several patches this size or greater:

Most were of this general type, but there were also red, orange, and yellow ones! These things are huge -- several inches across -- and they grew literally overnight. And it keeps happening. About every other day I remove one or sometimes two grocery bags full of several pounds of mushrooms.

It's been raining a lot, so apparently some sort of chemical threshold for favorable fungal growth has been reached -- or Tim Burton is sneaking onto my lawn every night and shooting an Alice in Wonderland sequel on a budget.

(Sorry for using cell phone pictures on a photography blog, but I was just too shocked to go get my camera!)

Apparently, I'm not the only one who's noticed these invaders. This morning I saw two chipmunks having quite a party. They were apparently just sunning on a rock -- but then one turned suddenly, walked a couple steps to dart down his hole -- and missed! Overshot a little and bumped his head on a pillar. Then the other one turned and tried to follow, but kept listing to the right. Finally he found the wall and just sort of sidled along it for a while.

Upon closer inspection, some of the larger mushrooms bear marks that look suspiciously like chewing... so the conclusion is obvious. My chipmunks have been chowing down on psychedelics! 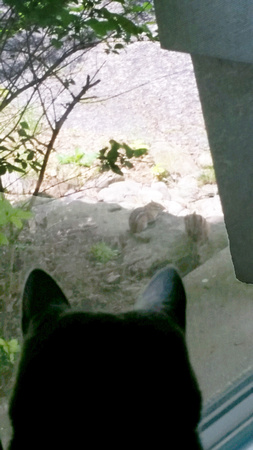 Of course, now I'm thinking. How can I get the cat to try them?